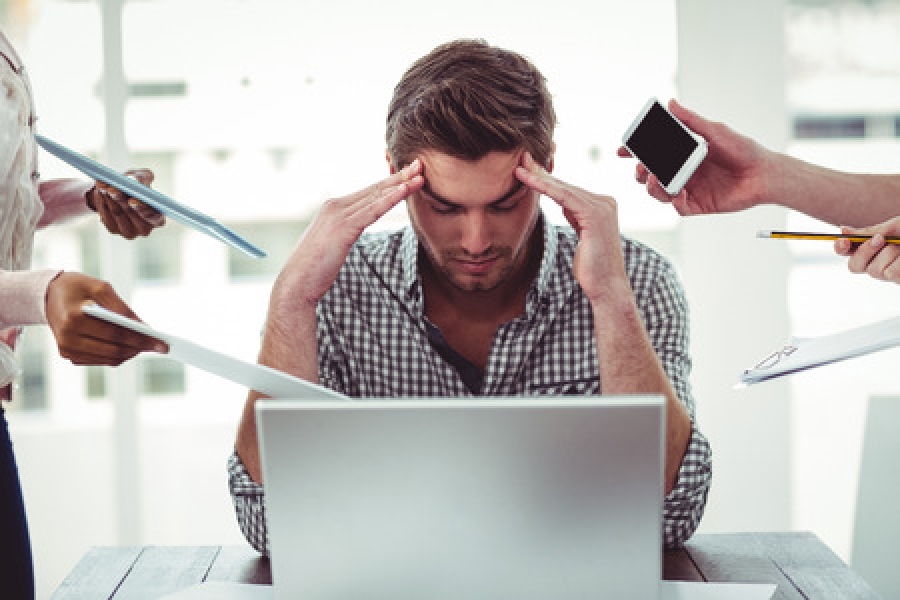 It is generally accepted that modem living can be very stressful. It is important to understand the causes of stress, to differentiate between good and bad stress, and how massage contributes to its management.

Not all Stress is harmful. Many people do their best work when stressed. The need to achieve and the drive to obtain success can in themselves be helpful rather than harmful factors and may contribute to a harmonious lifestyle. Much outstanding work in the fields of science, arts and business has been a attained under conditions of stress. Therefore it is necessary to look at stress, its causes and the factors which can make it harmful.

Death from heart attacks and coronary artery disease is often associated with over-achieving, high-flying executives, but this is not necessarily so. In a study of the civil service (The Whitehall Study) over a ten-year period, it was found that death rates from coronary disease were lowest in the administrative grades and highest in the lowest grade. The researchers found that people on higher grades felt more in control of their work and better supported by friends and colleagues so that, although their lives appeared more stressful, they were able to cope. These people had more hobbies arid interests outside work. Whilst not suggesting that stress or the lack of it was the only factor contributing to these deaths during working life, it must be assumed that it played an important part. Other studies have confirmed that people who are employed in positions where they have job satisfaction and enjoy a certain amount of control have a better health record. For example, a review carried out by the Medical Officer of the British Institute of Directors showed that chairpersons of companies rarely suffer heart attacks whilst in office.

We will see later that stress manifests itself in many different ways, but it originated in antiquity. The "flight or flight" syndrome was seen in our ancestors who, when faced by marauding enemies or wild animals, had only two choices either to stay and fight or to run away. Both choices required an increase in energy which the body provided through release of adrenaline.

In modern life we are not very likely to be faced with these alternatives, but we may still feel angry because of a very difficult customer, or fear when (unjustifiably) we are 'put on the carpet' by our boss, or frustrated by non-recognition of our work. In these circumstances, adrenaline is released but, because we are unable to use it (i.e. to fight), it remains as a harmful substance in the body. One of the effects of this is a chemical reaction with 'good' cholesterol converting it to 'bad' cholesterol. This, in turn, causes a hard waxy substance to build up on the inner walls of arteries, the reduced bore of the blood vessels increasing the blood pressure, or hypertension. In some Japanese companies they have rubber models of bosses in the company's gymnasium so that, having to stand and take a telling off by the boss, they may later visit the gymnasium and knock the 'living daylights' out of the rubber model! It has been found using up of the adrenaline has a profound effect in restoring normality to the situation.

It is useful to look at the physiological pathway of fear and anger.

Together they equip us for emergency action. They contract the arteries; the heart beats faster to supply more blood which is drawn back from the skin in order to make more available. In addition, the blood clotting time is quickened and the liver is stimulated to release more glycogen for muscle energy.

Body physiology requires time to adjust to environmental changes and the following timetable shows why we currently have problems;

The speed of change has been accompanied by a number of other factors which contribute to stress:

There are three fundamental stresses:

There are three elements involved in stress:

Stressors, things which causes stress, may be:

The above extract is from "Principals and Practice of Physical Therapy" by William Arnould-Taylor. It is published by Stanley Thornes, Cheltenham, England, GL50 1YW. (ISBN 0-7487-2998-4)

Why not take our simple stress test to see how much stress you are under.

Tweet
Published in Blog
More in this category: « Stress at Work 6 Essential Oils to Immediately Boost Your Wellbeing »

“I was made to feel very relaxed even in a short time it really made a difference.”

“Very professional service throughout from placing the booking to the treatments, all the staff felt wonderful afterwards and we are very pleased with the results.”

“Although it was my first massage, I thought that the therapist was very friendly and gave an excellent service. I found the session very relaxing, and felt good afterwords.”